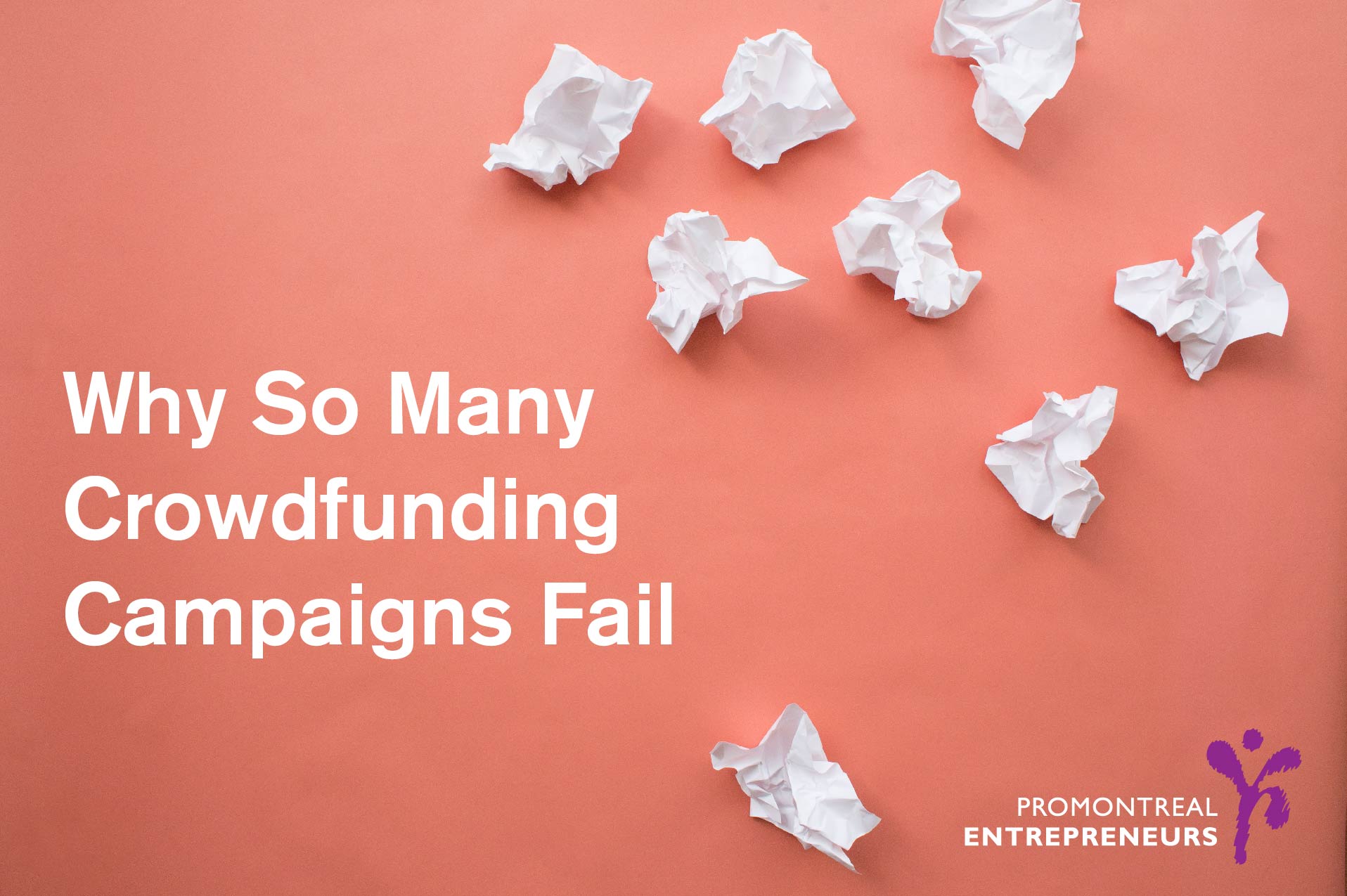 Crowdfunding platforms, such as Kickstarter and Indiegogo, have become mainstream in the past few years. There are many reasons why early stage entrepreneurs have turned to crowdfunding. Some of these reasons include not wanting to take out more debt, validating product market fit or  simply to create a brand following. Crowdfunding serves many benefits such as crowdsourcing, opportunities to pre-sell, and starting a campaign is usually free. As great as these things might sound, having a successful crowdfunding campaign is harder than it seems. For every successful Kickstarter campaign, two fail, and about 9 out of 10 Indiegogo campaigns fail to reach their goals. Here are a few reasons why experts believe that so many crowdfunding campaigns fail.

There are so many projects and initiatives on crowdfunding platforms, you must find ways to stand out in the clutter. Many crowdfunding initiatives have a reputation for unmet promises. Highly publicized credibility issues run deeper than product or supply-chain issues. The PME funded company, Revols, had managed to avoid such issues with their highly successful Kickstarter campaign, which garnered 2.5 million dollars in just a month. Their Kickstarter video showcased their credible partners, endorsements from industry experts, and specific accreditations to their name. They also hired a PR firm in order to make sure the right image was being spread prior to launch. Two weeks prior to starting their campaign Revols visited established media outlets with product demos in various North American cities. Like Revols, you have to be on top of your PR game.

A video that is too long is not likely to be shared on social media platforms. Keep your video length between 1 to 3 minutes long, so that people who would like to share your video with their network will be likely to. Sharing aside, people are also busy and have short attention spans. They want something, short and informative to watch.

Videos have the capability to tell stories better than any other medium. Your video should have a story line that elicits emotional feelings from the viewer. If your video doesn’t seem sincere, you will have a difficult time getting investments or even people following-up on your brand down the line.

If you know exactly what you’re going to be using your money for, so should your backers. Investors want to know how their money will help you. Putting out vague statements such as “help our business grow” or “we need your help to expand” does nothing to show that you have a strategic plan moving forward. To our previous point, not being specific also doesn’t do anything to boost your credibility.

By testing we are referring to two things. The testing of the product and the testing of your Kickstarter page prior to launch. Before investing people want to know that your product has been tested and that it has garnered positive reviews from users and industry experts. Investors and backers want to be sure that their money is going into a quality good that has been vouched for. Testing your Kickstarter page means sending it to friends, family, mentors and trusted individuals in order to get feedback on its presentation and content. Building social capital prior and during your launch will have immense payoff.

Don’t aim to get millions of dollars right off the bat. Even Revols had the objective of raising only $100,000 before they reached their $2.5 million mark. You should plan and set a timeline for the investments you hope to receive. Being conservative with your estimates is always better. Your goals should be SMART, in other words, specific, measurable, attainable, relevant and time-bound.

These are some of the main reasons why crowdfunding campaigns fail. If you do the right planning in order to avoid these mistakes your crowdfunding campaign will already be more likely to rise above the clutter. Even if you don’t achieve your campaign goal, you should still be leaving the platform with more than you entered. You should have more supporters, a longer e-mail list, and most importantly, a better idea of what it is that your consumers want.